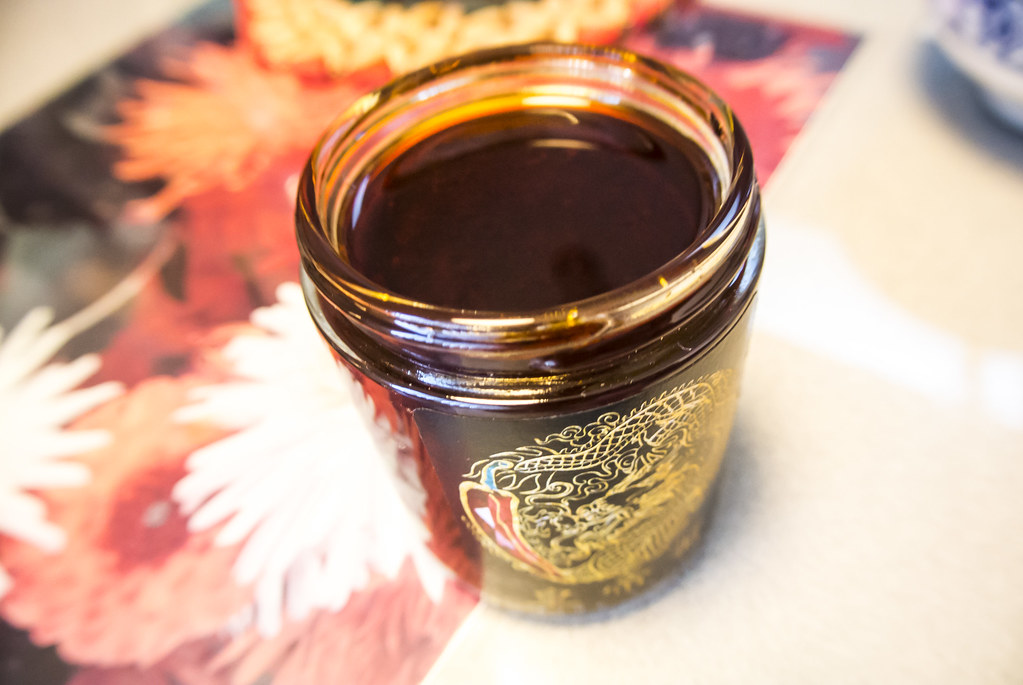 Hey guys! A new sauce has been making its rounds on Instagram in the form of Betty’s King Sauce. You can’t even find this sauce in grocery stores, but I have a 6oz jar for review today. Is this the new sauce or should you stick to your old sauce? Read on to find out.

Betty’s King Sauce costs $10 per 6oz jar and is a mixture of fresh Thai chilies, fresh jalapeno, fresh lemon grass, fresh garlic, dried shrimp, and dry chili flakes.  There’s no nutritional label on the jar so I pulled these ingredients from Betty’s website. The front has a pretty cool logo. 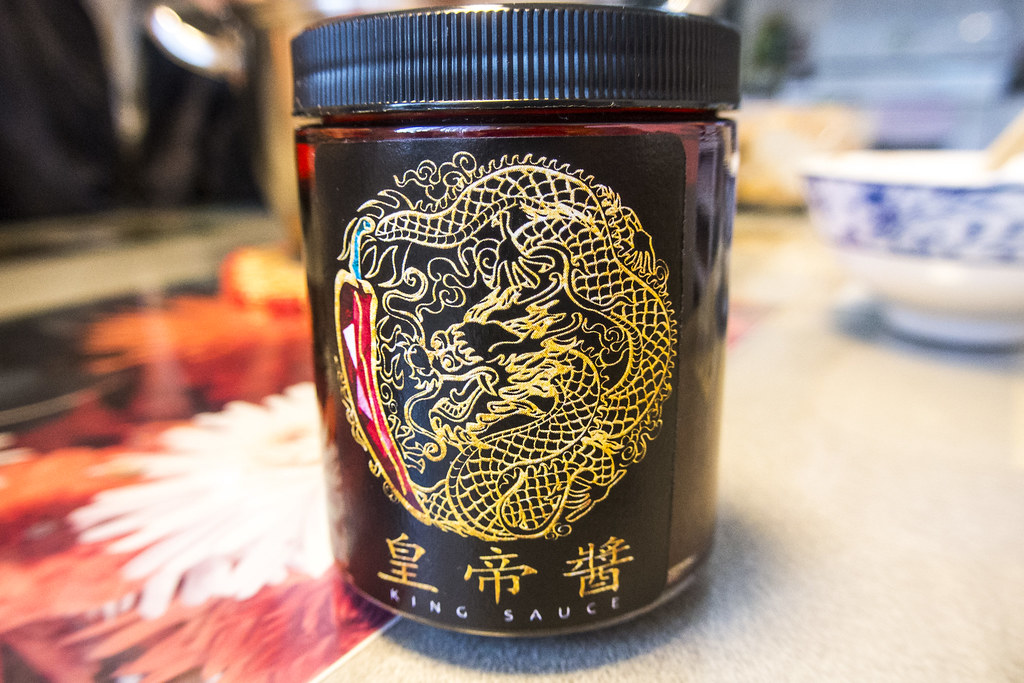 Looking inside, Betty’s King Sauce is a sort of satay, meaning there are little nibblets in addition to the sauce that add to the experience. I’m a big fan of satays because they add texture to the food I eat, and the heat is real in this satay. One scoop is enough to keep my mouth tingly after my meal. I think most floury foods and veggies would do well with Betty’s King Sauce if you want a unique hot shrimp zing added to your meal. This isn’t as hot as super hot Mexican sauces but it’s a little hotter than Sriracha. I anticipate there are about 15 servings of the following serving below. 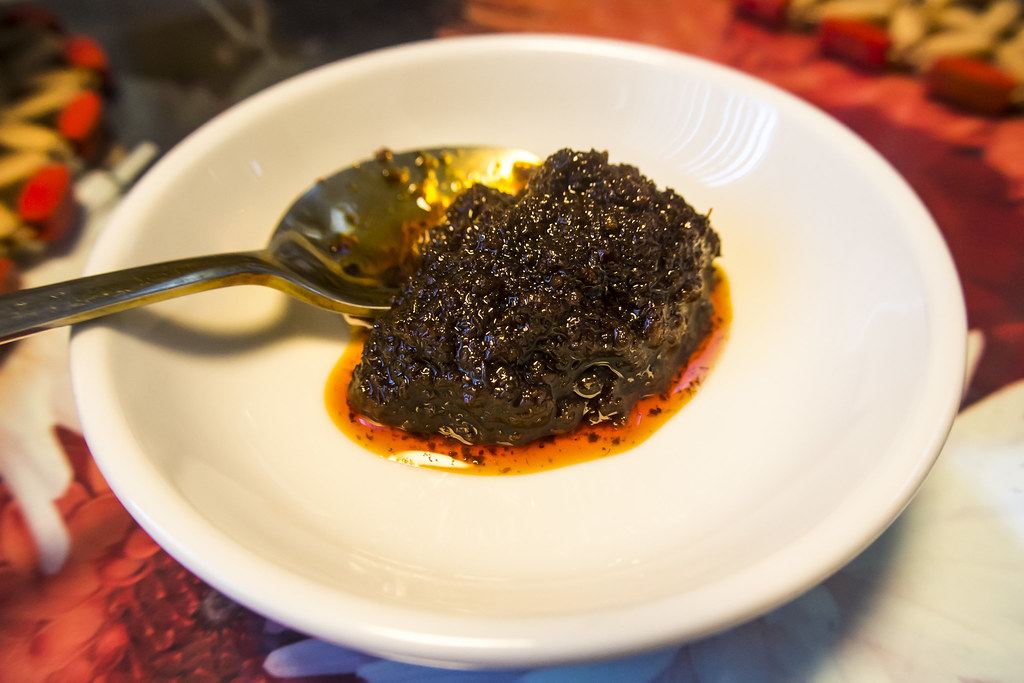 Below is the story of King Sauce by Betty herself:

What convinced you to make King Sauce?

Betty: I was 23. I didn't know what I wanted to do, which career path to take, and seriously thought about what I could do or dream about to be happy and successful. You know what they say: “You should to do something you're passionate about to be successful.”. So I started to make a list of the things I liked and were important to me.

At that time knew I had to do something food-related but I didn't want to be a chef. I hated writing so I probably wouldn't enjoy being a food blogger. I just wanted to be a judge on Iron Chef Japan!

I wanted to create something that I would love and feel connected to. I knew about XO sauce but I didn't want to make another XO sauce. I knew there were chilli oils but nothing in between. Well, XO uses scallops so I decided to use shrimp which is Chinese and lemon grass which is Vietnamese to make a chilli oil that was in its own category. I thought about the name and my name, “Yick Daie”, had part of the Kings name, "Wong Daie" I called it King Sauce, "Wong Daie Jeurng". I told all my friends that my dream was to distribute King Sauce.

Years later it was a fluke that I was getting married to a man with the last name Wong so when I got married I would be "Wong Daie". That to me was confirmation that it was meant to be. King Sauce is me in a jar. Like a painter who has a part of his soul in his paintings, I put myself in a jar. I was scared that people wouldn’t like it. Rejecting King Sauce would be rejecting me! I was already a very insecure girl in my 20's about my capabilities and if people rejected King Sauce I would be devastated. I already felt like a failure because I didn't go to university and I was Asian! Every day I would day dream and talk about it, but I never got the courage to do something. Every time I was in a supermarket I would look behind all the jars to make sure no one else made King Sauce. Every year I would say to myself “One day! After I get my shit together, after I start a real career, after I get married, and when everything is in place, I will start my King Sauce business with my best friend and husband who had to listen to me and watch me dream about King Sauce.” As the years went by, I got a job, I went back to school to switch careers, I finally got married to my best friend with whom I was with for the past 10 years, and my name was "Wong Daie".

One year after we got married he said he wanted a divorce and ran off with his co-worker and my world came crashing down. Day after day, year after year, I could not get over it nor did I feel like there was a reason for living. One day my co-worker asked me to make him more King Sauce. He had been waiting for a year and really missed it. How could I say no to a friend?! I said “Okay I'll make some for you”, and since I was doing something I thought maybe I will post it so I looked like I had a life. I was like the Walking Dead for 3 years! I realized that it was something I really enjoyed doing and so I said to God, “I don't know what I'm doing and I don't know if King Sauce is in Your will, but I'm going to keep making it because I enjoy it.”

One by one it came together. I've met so many incredible people, I feel like I'm part of a community, and I get to share what I love with the community.

This is Betty's story, so if you would to support Betty’s homemade King Sauce, head over to her website or send her an email order at bettyskingsauce@gmail.com

Hey guys! If you’re looking for a skytrain-accessible new ramen restaurant that isn’t found in the West…