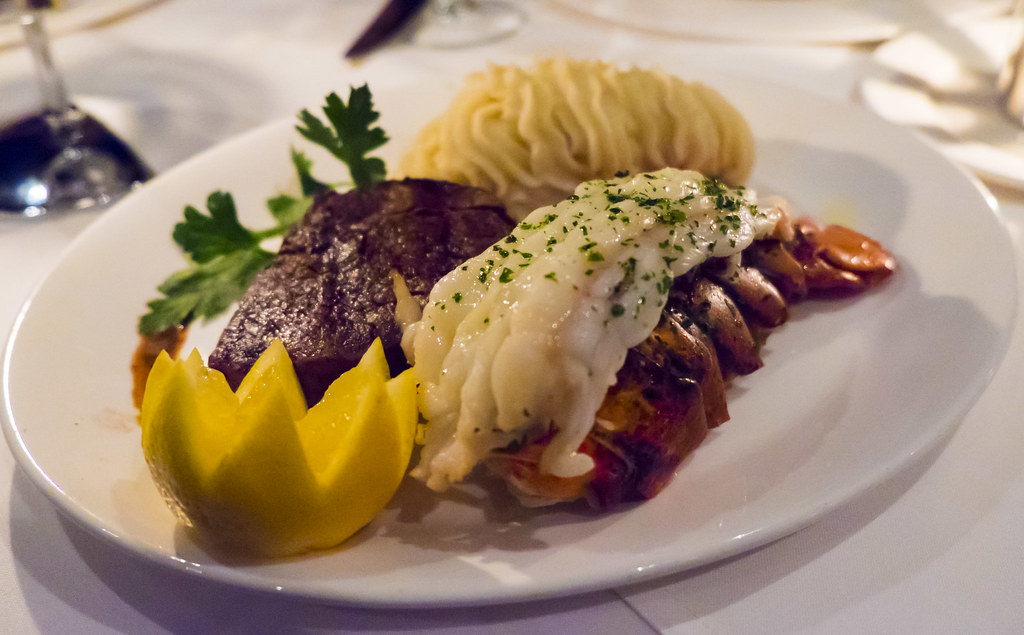 A dinner at Hy’s Steakhouse is not my usual haunt. Luckily for me, the company I work for deemed it appropriate to celebrate the end of Q3 and we took over their Wine Cellar room. With heritage from the early 60′s and some of the highest menu prices you’ll find in Metro Vancouver, can one really expect to have it all at this steakhouse or are there holes on the surface? Read on to find out.

Team GlueCrew came here for dinner and I had the following:

Like at any restaurant with an espresso machine, I started off with a latte. I’m not sure how much the latte was but it sure isn’t what makes the restaurant tick. Whereas most restaurants will give you a simple finger-width layer of foam, I could be convinced that Hy’s frothed their milk with those battery-powered frothers you buy from the PNE. A pretty latte, this was not, though it was served at the regular temperature making it very drinkable. I’ll need to come back and see if the latte art was intentional or a mistake. 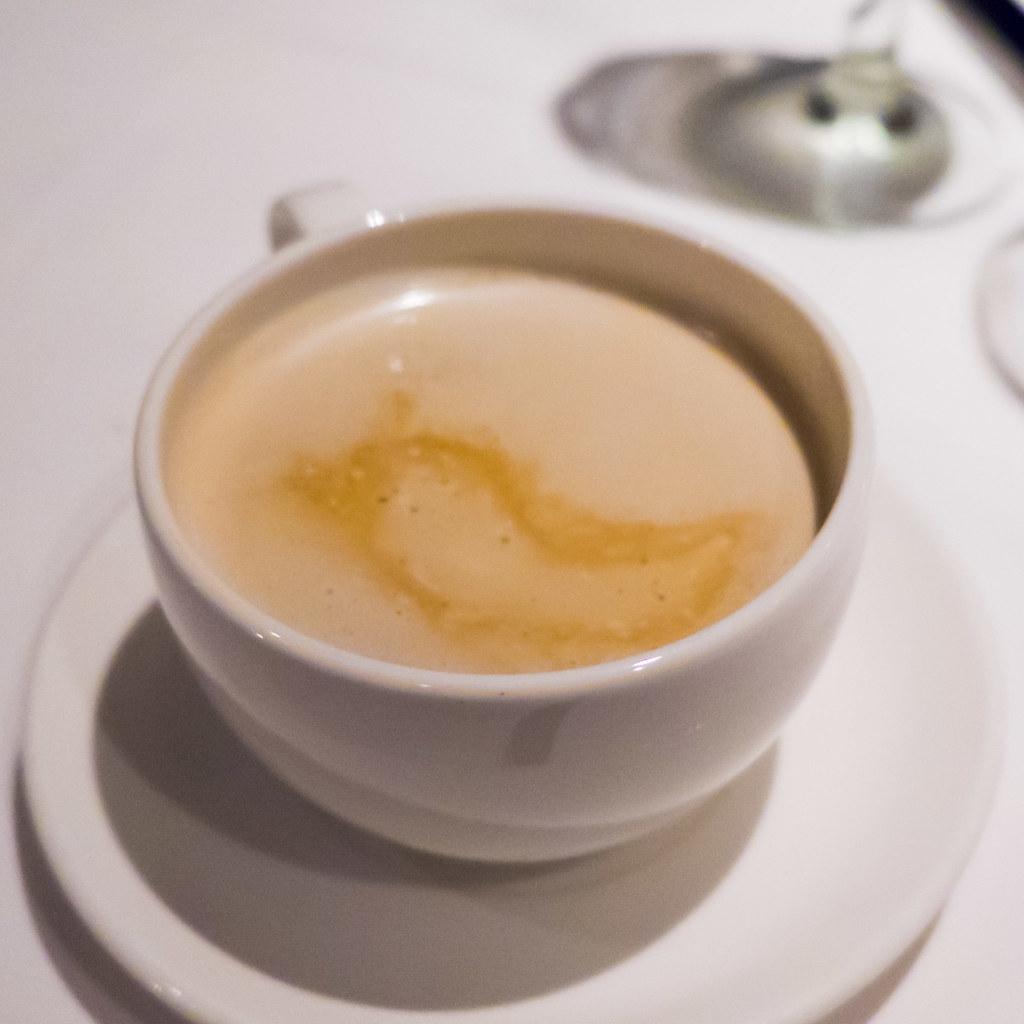 Moving on from caffeine, I indulged in a Magic Hour cocktail next. This was a mix of Lillet rose, Chartreuse, grapefruit juice, and Domaine Chandon sparkling. This had a mild floral taste to it and I’m always game for a sparkling from Napa (they have great bottle art). This would be good for those looking for a step up from a Whiskey Sour with more bubbles and an enhanced taste. 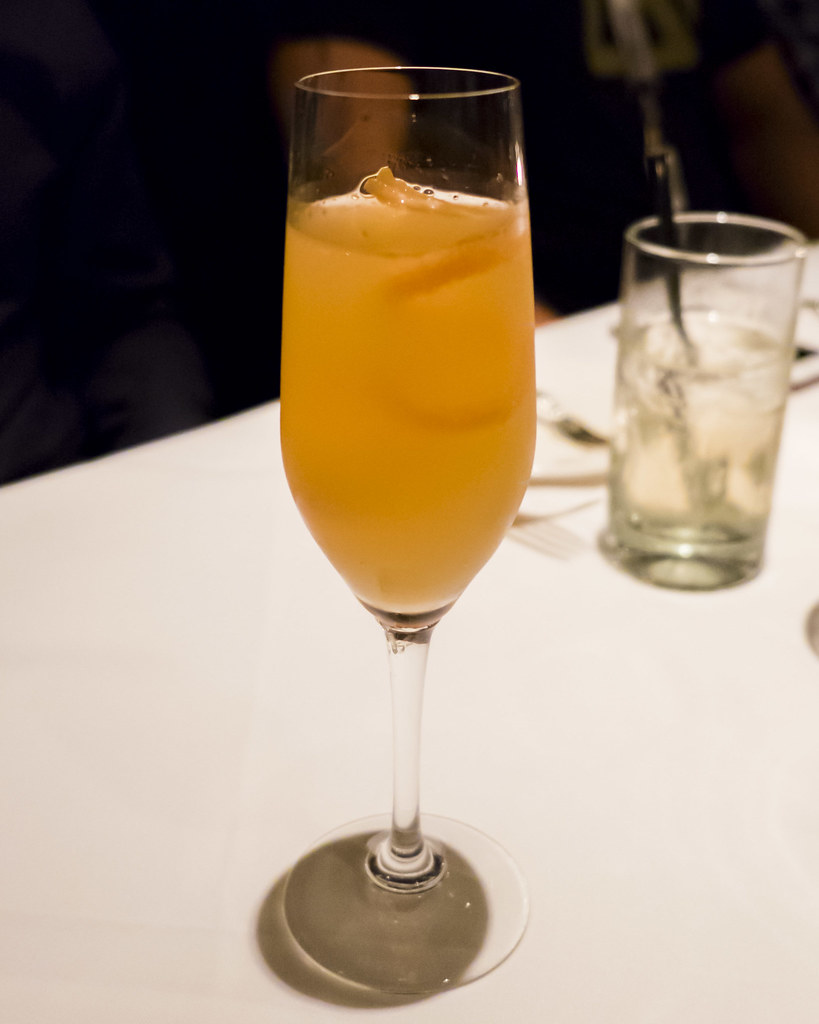 The first food to arrive was the famous Cheese Toast. Heck, we didn’t even order this, but it was offered to us. Famously, every food blog I’ve read that’s been to Hy’s has also referenced the cheese toast, and the hype is real. Savoury, melty, cheddar goodness is in every bite and the soft buttered toast makes everything better (and possibly cheaper if you really indulge in these carbs). 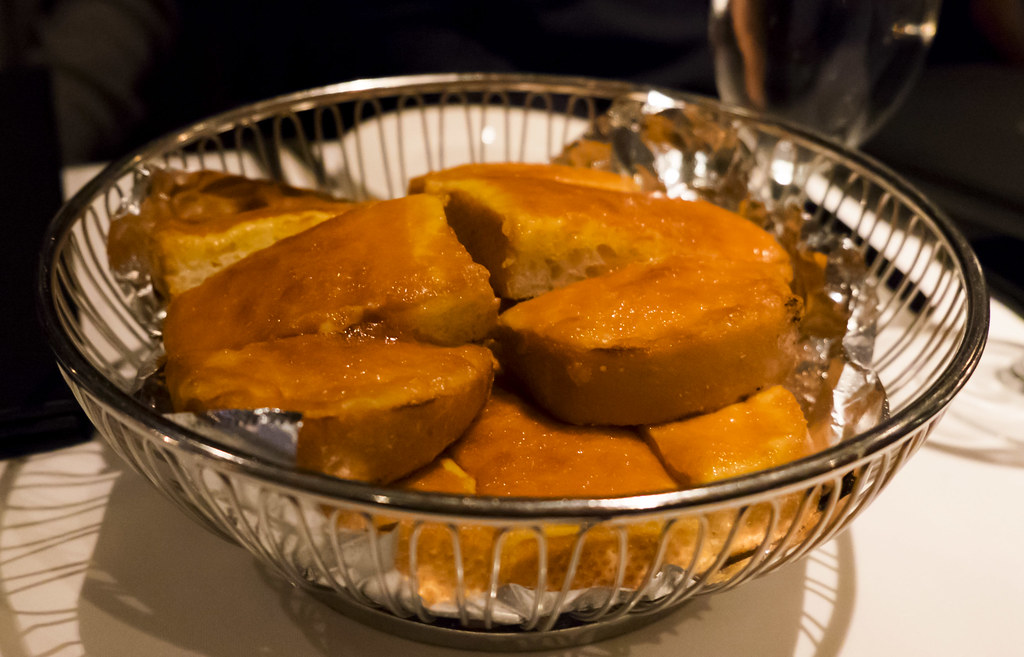 The Oysters Rockefeller were my choice of appetizer. These were similar to the Oyster Casino from Fanny Bay Oyster Bar but came with a more intense hollandaise sauce and spinach. These were piping hot so watch out! As I offered an oyster to a non-oyster loving colleague, they conceded that this oyster dish was good enough for them to try oysters from Hy’s in the future. 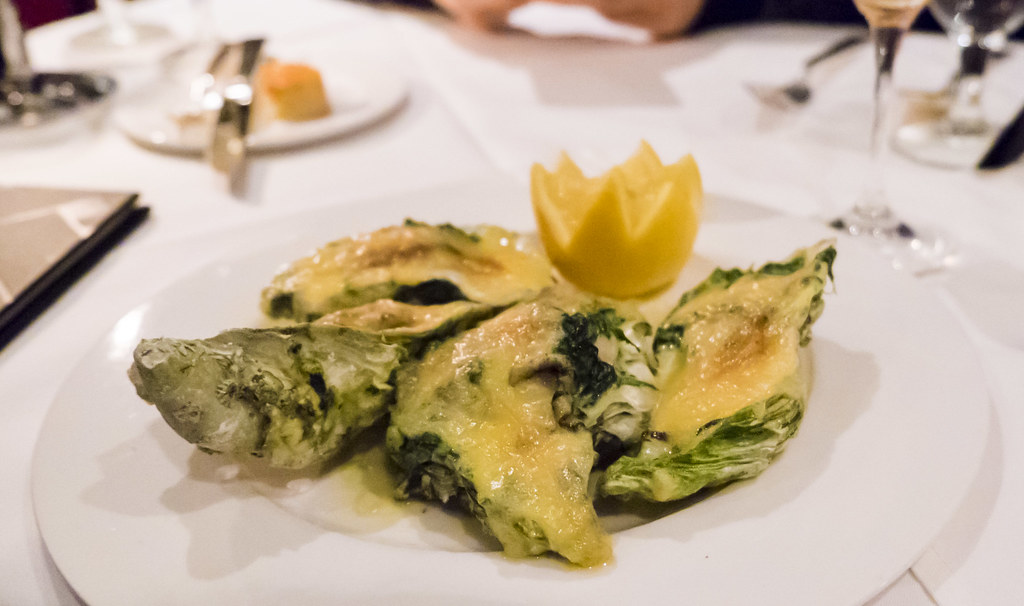 My main course was the Steak & Lobster. I wanted the best of both worlds and on the plate came an 8oz Canadian prime Filet Mignon served with a broiled Atlantic lobster tail, lemon butter, and the regular fixings. The picture shows the lobster tail still present but our server helped me separate the meat and she did so perfectly. The mashed potato had beautiful swirls and I firmly believe there is a single talented person in the kitchen whose job is to make art out of mashed potato.

Both the filet mignon (medium-rare) and lobster tail were cooked to perfection. I hate using the word perfect, but at a restaurant of this caliber, I think they deserve the honour as the filet mignon had a sound ring of cooked beef and was incredibly juicy. The lobster was likewise juicy and had zero hints of dryness you’d find even at high-end Chinese restaurants. Bravo on the steaks, Hy’s Steakhouse. 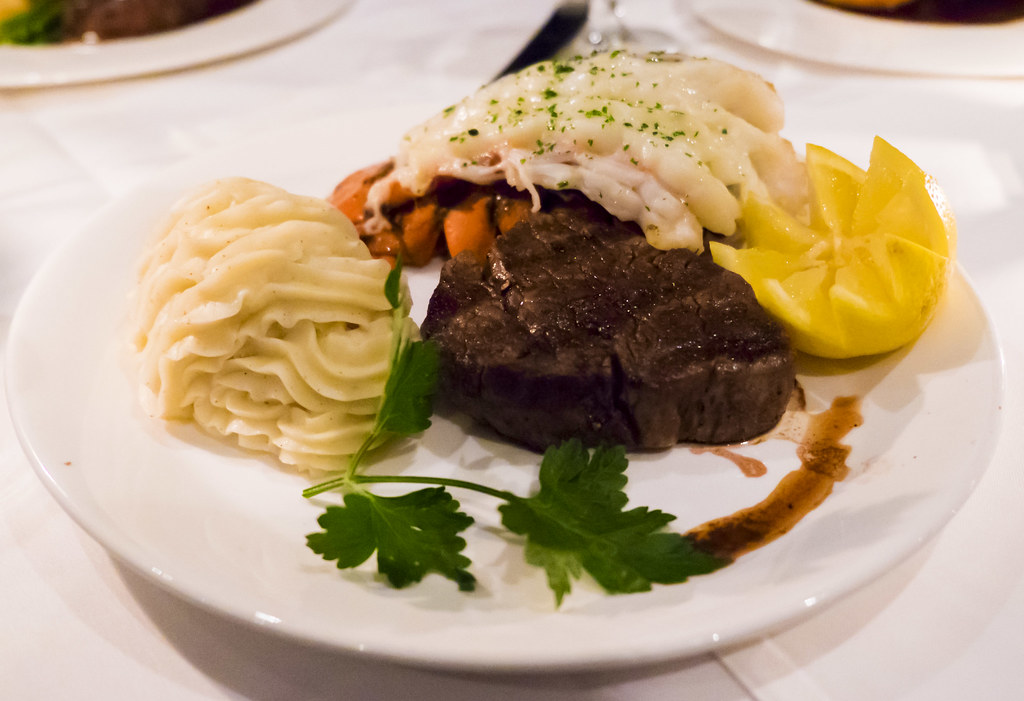 Moving onto dessert, my personal order was the Belgian Chocolate Bourbon Cake. This was a pleasant surprise as the cake was smooth like a ganache and didn’t contain any bread. This was a perfect example of the over-used phrase “literally melted in my mouth” because this dessert looked solid but melted as easily as the ice cream that accompanied it. 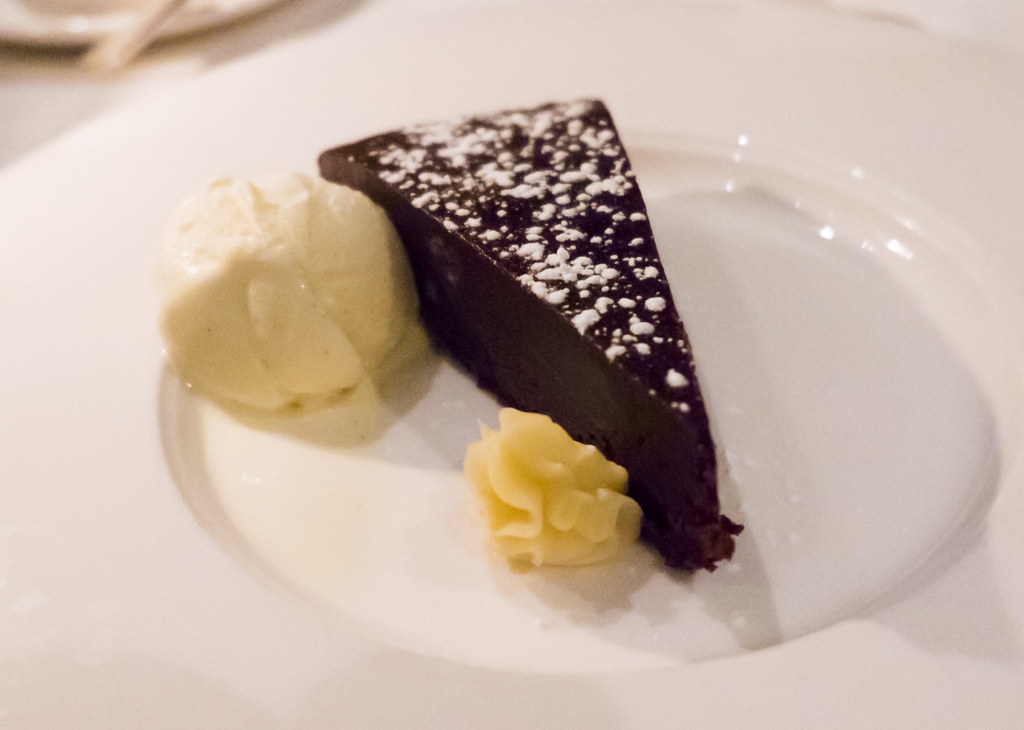 The Pistachio Crème Brûlée was my dessert of choice. Unlike midrange restaurants who will often serve this dessert in a circular ramekin, Hy’s served it in an ovular ramekin -- that’s a boost in dessert real estate! There was a satisfying crunch along the crust and the pudding beneath had a prominent pistachio nutty-ness. Overall, it tasted exactly as advertised which I loved. 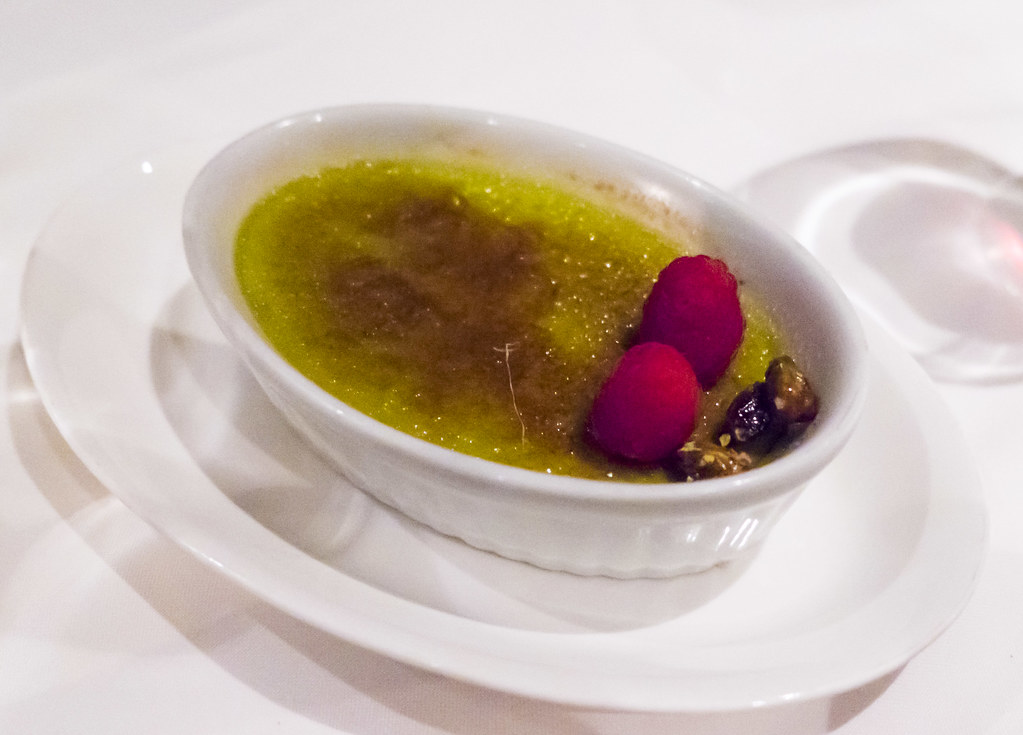 Finally, the Bananas Foster. This was the most expensive dessert on the menu and with it came a live demonstration. Here, ripe bananas are sautéed with butter, brown sugar and fresh orange juice, then flambéed with dark rum. 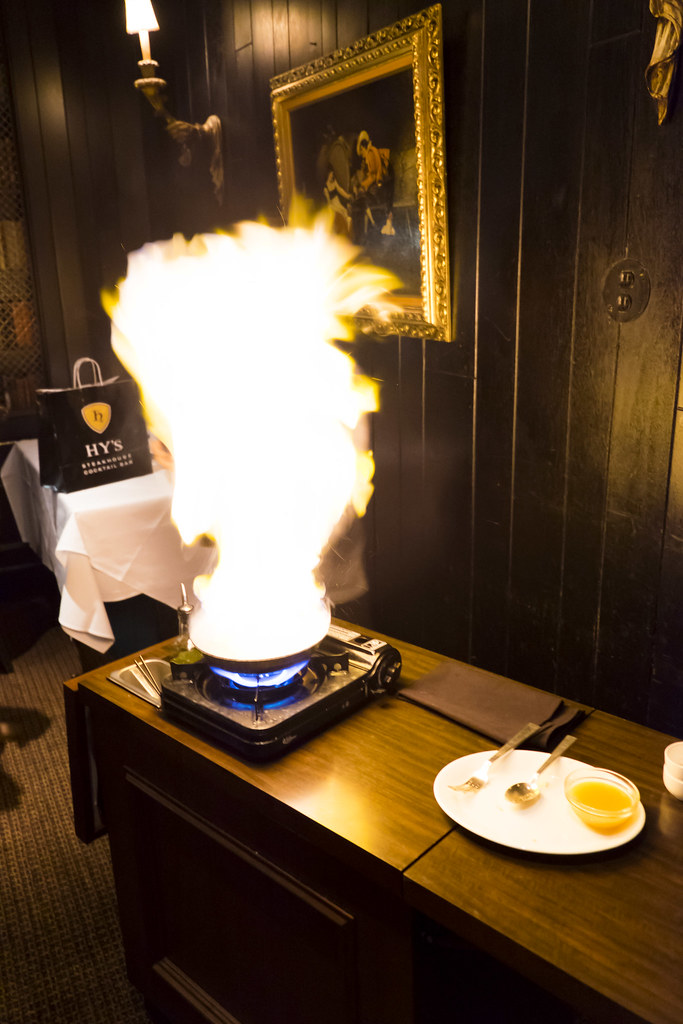 This experience reminded me of Japanese teppenyaki restaurants where chefs would occasionally flame up their cooking station as a show and I felt no different here. Thankfully, the bananas were very flavourful but if you’re not in for a show, I would invest my dessert dollars into something else on the menu. 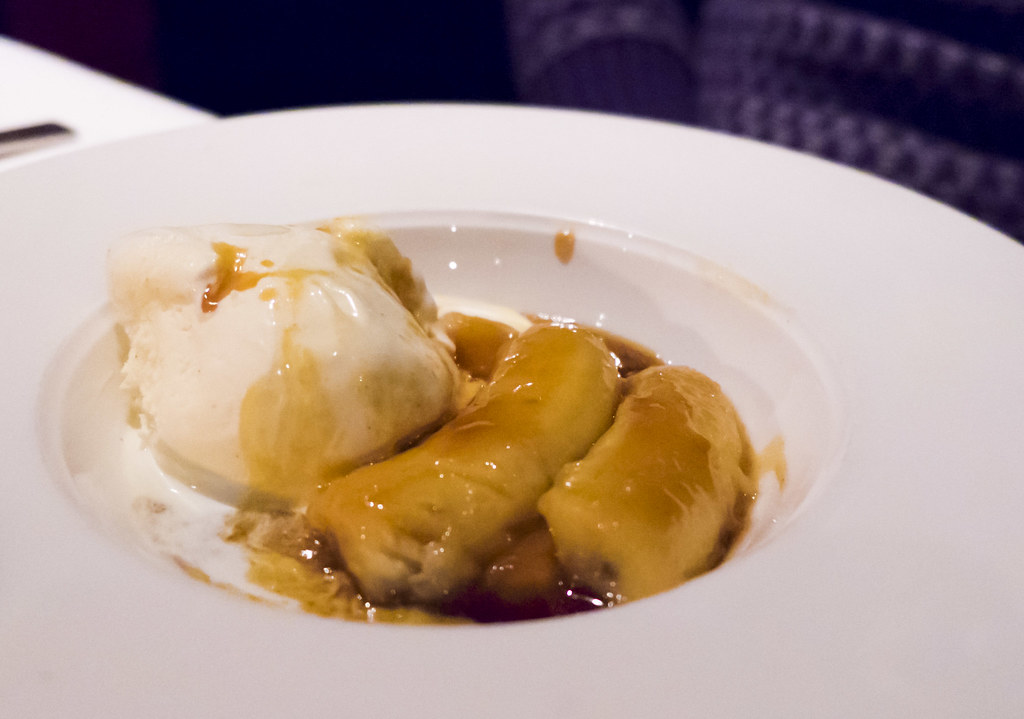 Hy’s Steakhouse has multiple sections. The entrance leads to a lounge area that looks straight out of a gentlemen’s club. Through a cavernous hallway is the main dining room, and a little nook off to the right lies the Wine Cellar room, where our party dined. There’s some old-school portraits hanging on the wall making you feel like you’re dining at an older time where steaks were the definitive symbol of Western class. Overall, it’s a very regal feel and a ton of detail goes into every square foot of the calm establishment. I’ve never felt so relaxed in a restaurant. Another great feature is Hy’s is its own establishment. It doesn’t live in a hotel and it doesn’t have to share the property with a separate entity. It’s completely independent, property-wise. 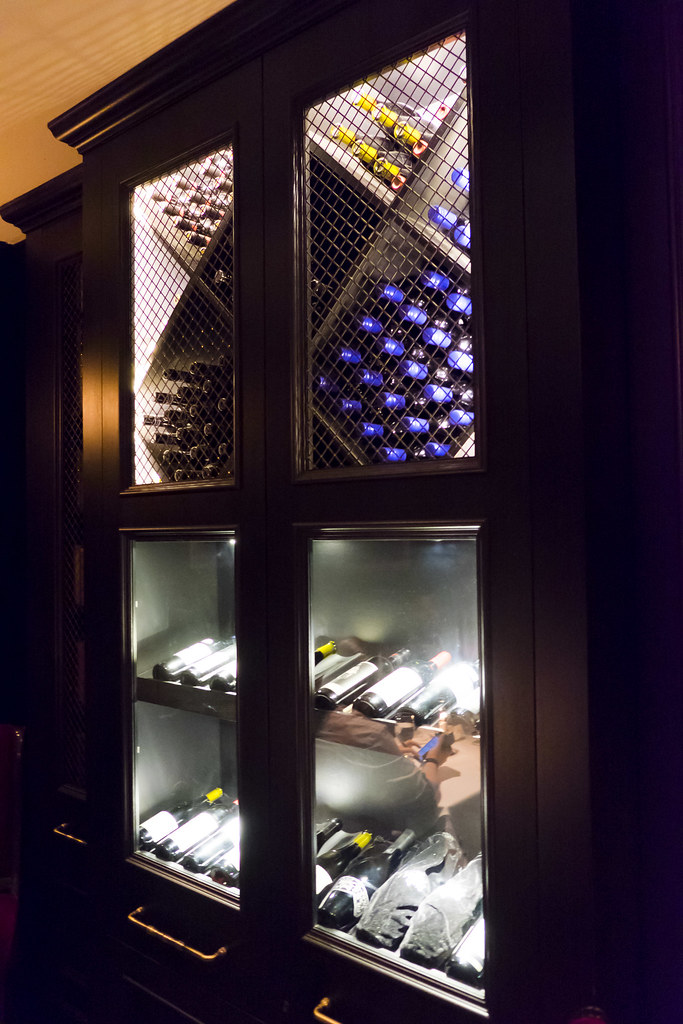 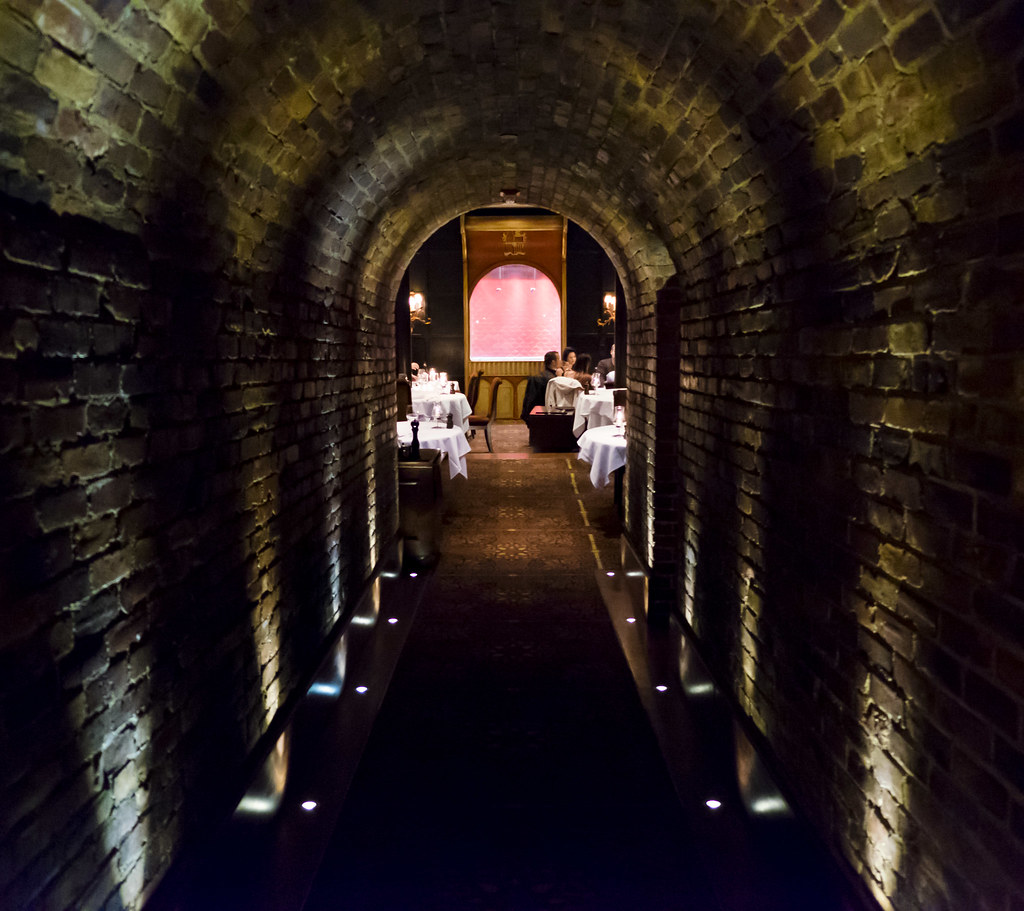 I have a personal philosophy that the higher up in the restaurant industry you dine at, the higher level of service you can expect (food quality is sometimes a different story). Our server at Hy’s was almost always available if she wasn’t preparing a dish for us or topping up water, drinks, and wine. She managed to stay completely calm despite having to deal with a chatty 12-top. 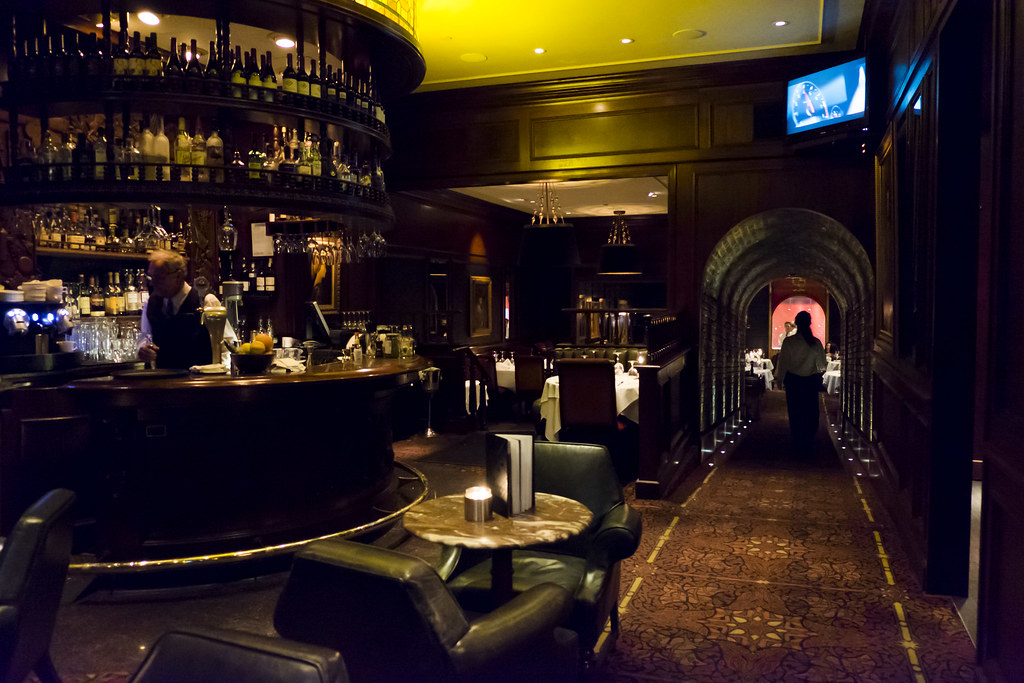 Overall, other than the latté, nothing went overtly wrong at Hy’s. While I don’t feel they change the restaurant scene (steak and seafood is such an old topic by now), I do feel the quality of service and dining options make any midrange restaurant look bad. There’s a reason this high-end Canadian chain has prospered for so many decades and I’m grateful I got a chance to experience it.

One-liner: Where your money transforms into the most comfortable dining experience in Vancouver and yes, you can have it all
Highlight: Steak & Lobster
Estimated cost per person: $120
Would I go back? Yes.

Hey guys! When the Vancouver Canucks are hot (4 wins to start the season!), you can hear the wheels…