Disclosure: My admission was complimentary and all opinions are my own. 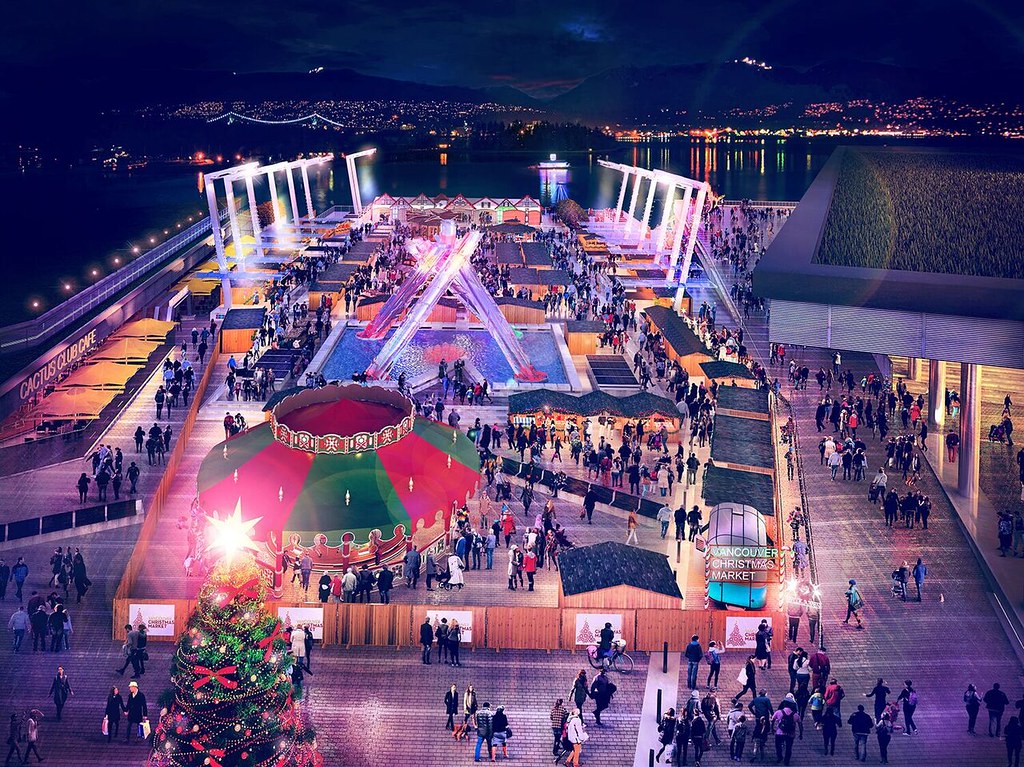 It’s December again! That means the Vancouver Christmas Market is in season and ready to serve up German-inspired holiday foods amidst a busy marketplace that includes handmade crafts, Christmas decor, and the traditional carousel. Does the new location for the Christmas Market point in a positive direction or should they have stayed beside the Queen Elizabeth Theatre? Read on to find out.

Team Tastic and squad came here and I had a great taste of the following:

The Traditional German Spätzle came in one of three sauce options and I opted for the traditional butter and Swiss Emmenthaler. The noodles were curly and looked fun to eat but they were a little mushier than I would have liked. This might have been less obvious if we got a creamier sauce but our sauce was pretty thin which made the mushy noodles a little more obvious. This was served with a simple gurkensalat (cucumber salad). Remember to eat your vegetables! 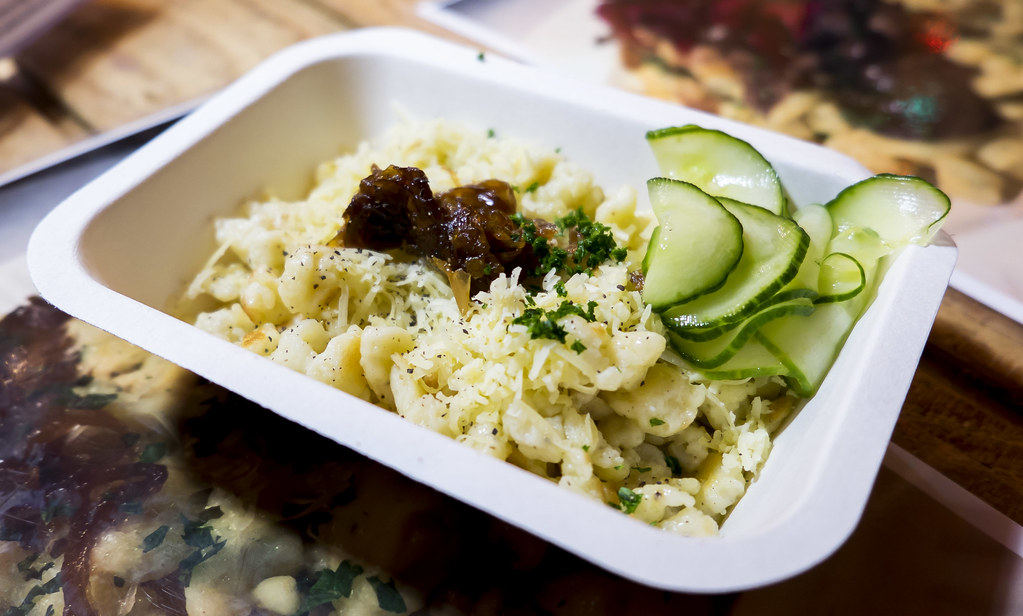 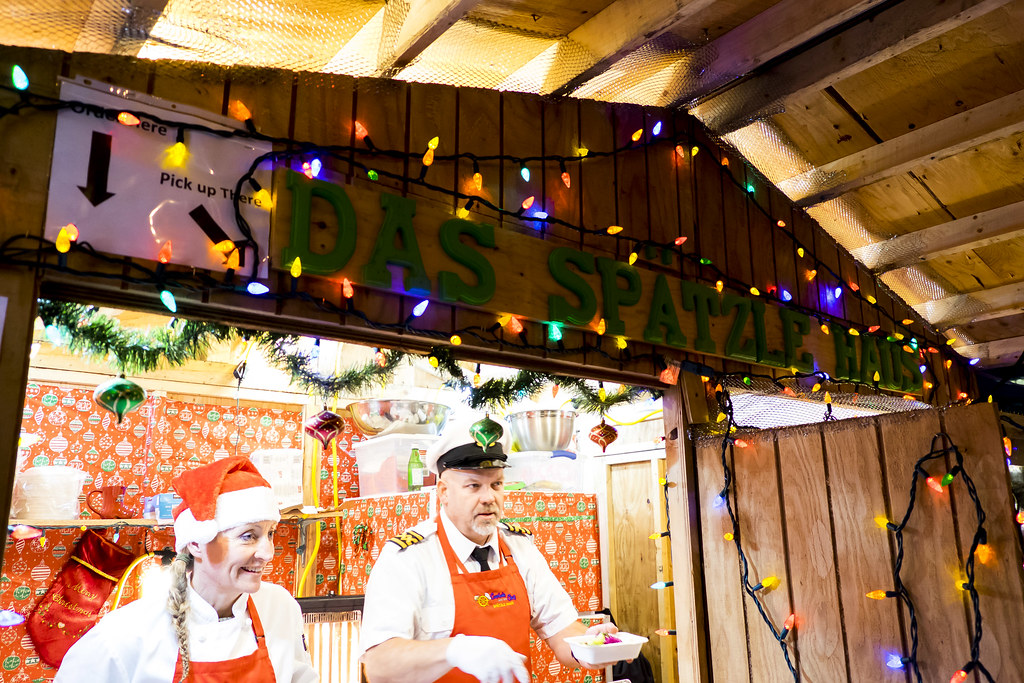 The Jägerschnitzel is one of my favourite things to order at the Christmas Market and it did not disappoint this time around. The hammered pork was tender, the breading was crisp, and the mushroom gravy added a very savoury finish. It even comes with potato salad on the side so this could be close to a full meal for the average person. 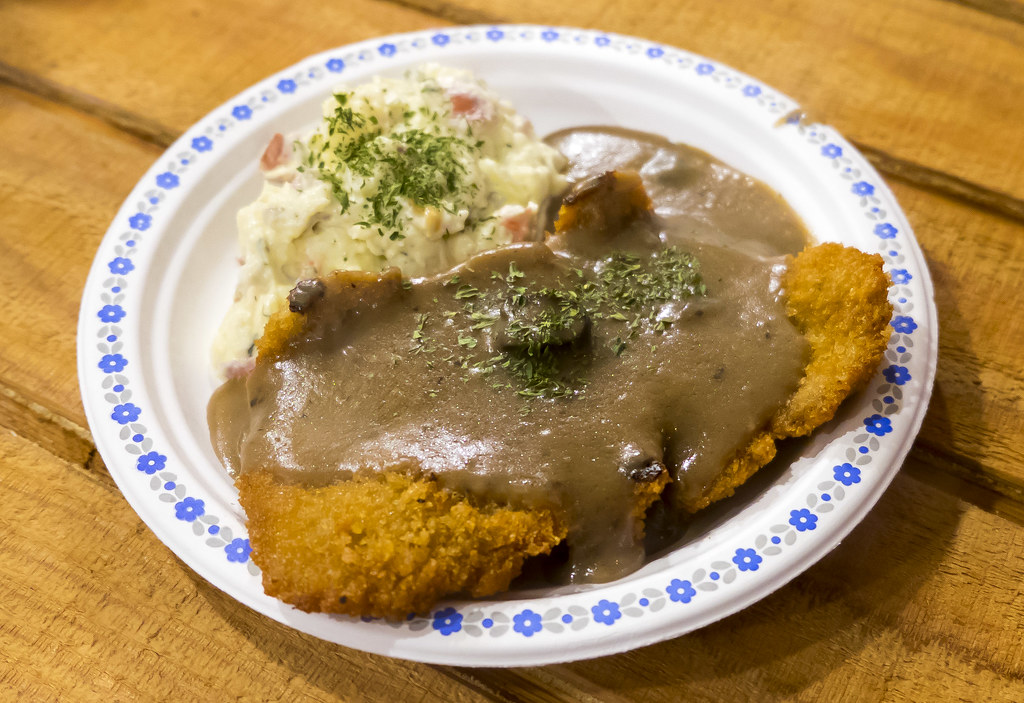 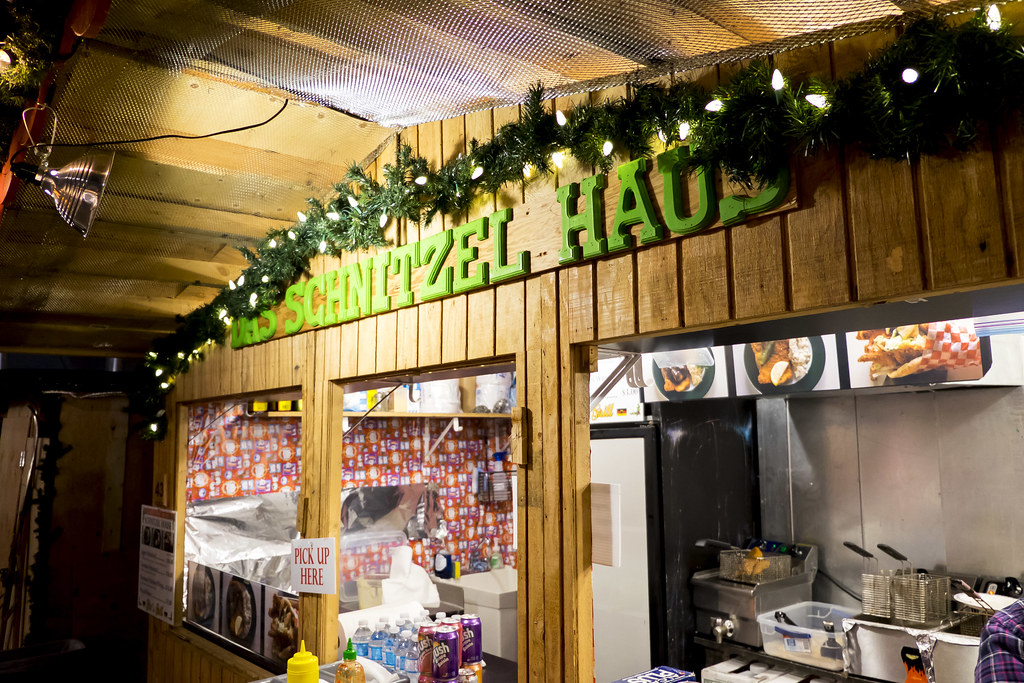 The Handbrot was a new item for me this year. This was an oven-baked ham and cheese sandwich that soft of looked like a calzone. The bread had a crisp exterior and the cheese had a great pull. I’d say this was marginally more filling than the spätzle but still enjoyable because it’s baked to order and served piping hot. 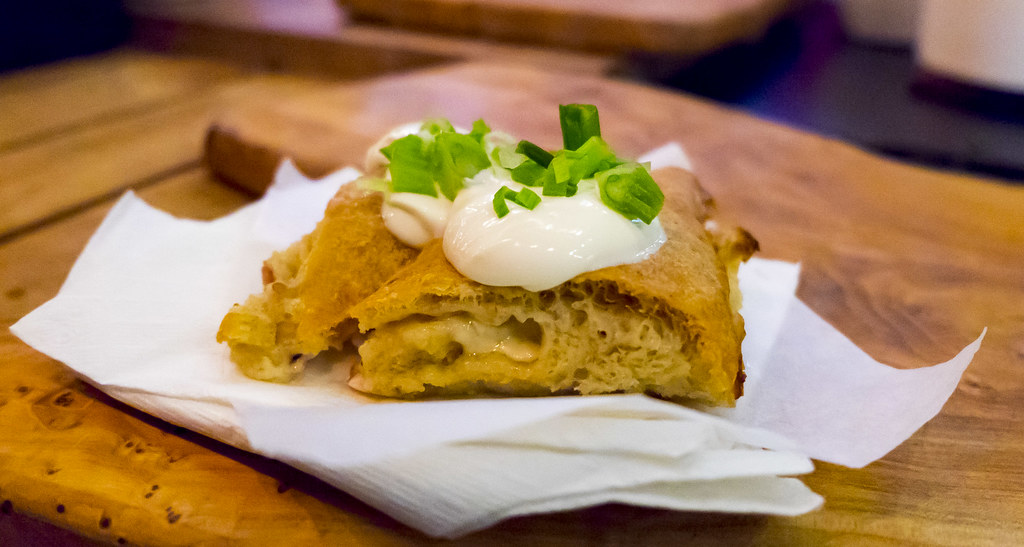 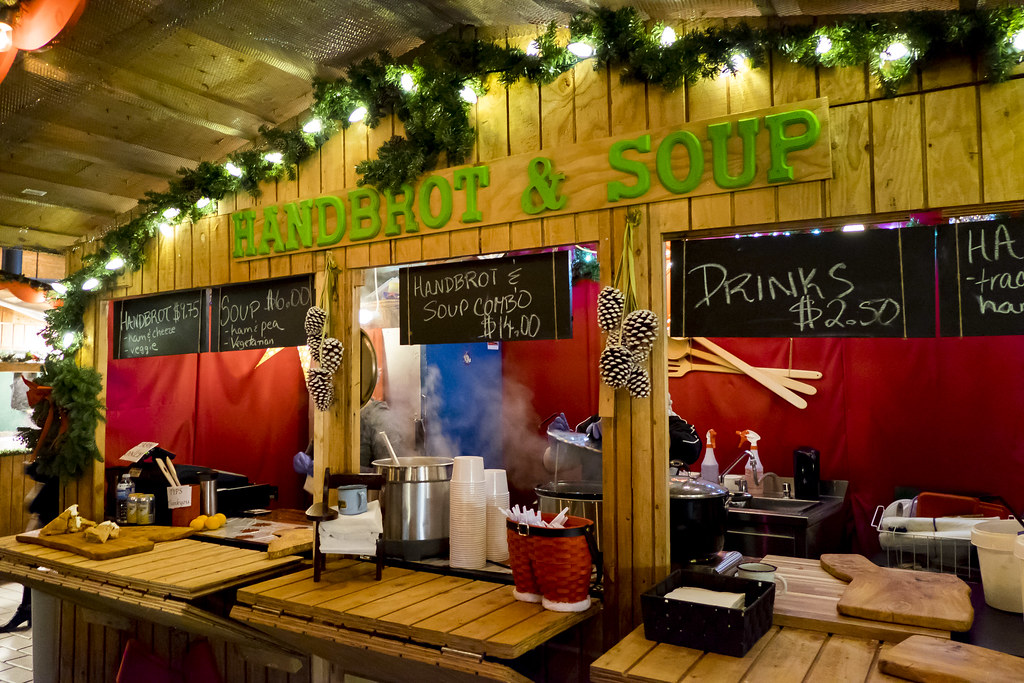 Last but not least, the Whole Pork Hock. This massive beast (bone-in) was cut up into bite-sized pieces and the meat was full of flavour. It’s a little on the fatty side compared to other items but that’s also why it’s so good. The bread and sauerkraut served on the side weren’t as exciting (our sauerkraut was a little on the watery instead of tangy side) but for those who like a tender pork with very crispy skin, this double-stall haus is a great place to invest your Christmas dollars in and very shareable. 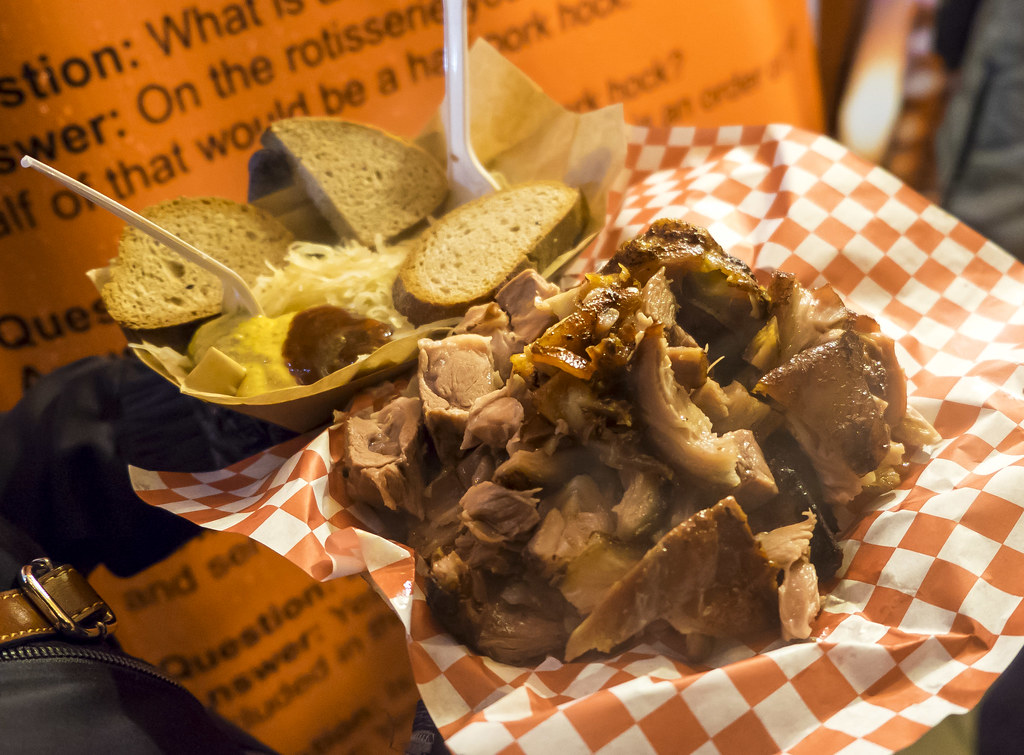 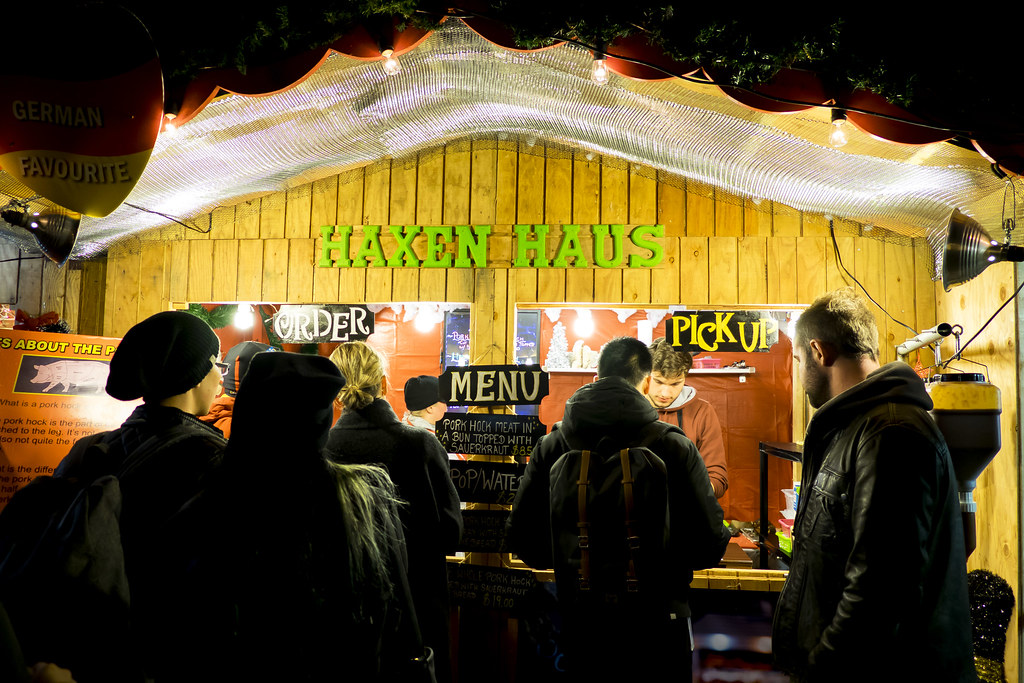 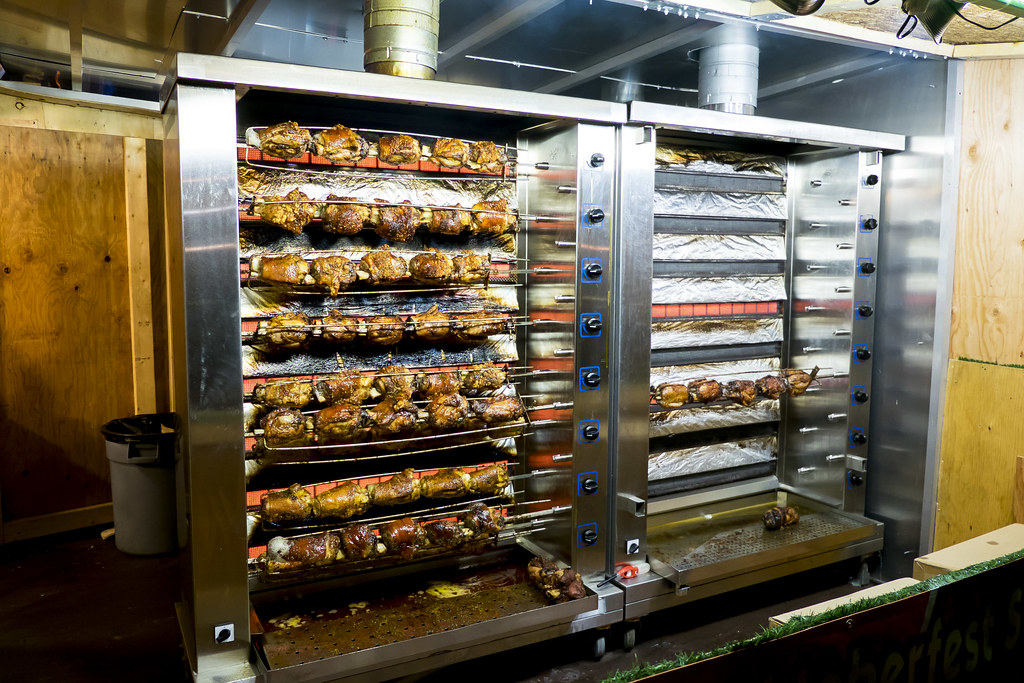 Gone this year is the Queen Elizabeth Theatre plaza as the market has relocated to Jack Poole Plaza surrounding the Olympic Cauldron in Vancouver. The main changes are there’s a lot more breathing space along walkways which got noticeably stuffier at the previous location. There’s also a larger eating area and an obvious backdrop of the downtown neighbourhood. Towards the middle of the space there is a stage where local groups perform classic Christmas tunes.

The shops all have the same iconic German haus look so the food feels homier. One thing to note is almost all of the stalls (at least the ones mentioned above) are cash only, so make sure you stock up on the paper before heading in. 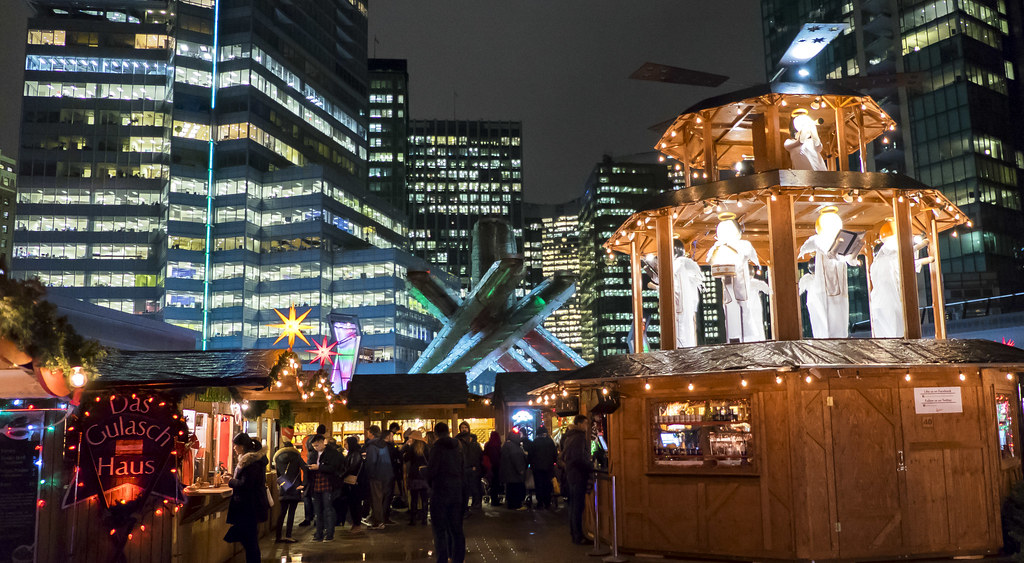 Inside the Vancouver Christmas Market

I noticed some things different from previous markets. The lack of a giant Christmas tree is a little saddening. Instead, there’s a main monument of angels in the centre of the market. There’s also no fire lit on the Olympic Cauldron, and I’m not sure if there are plans to include a fire lighting ceremony. 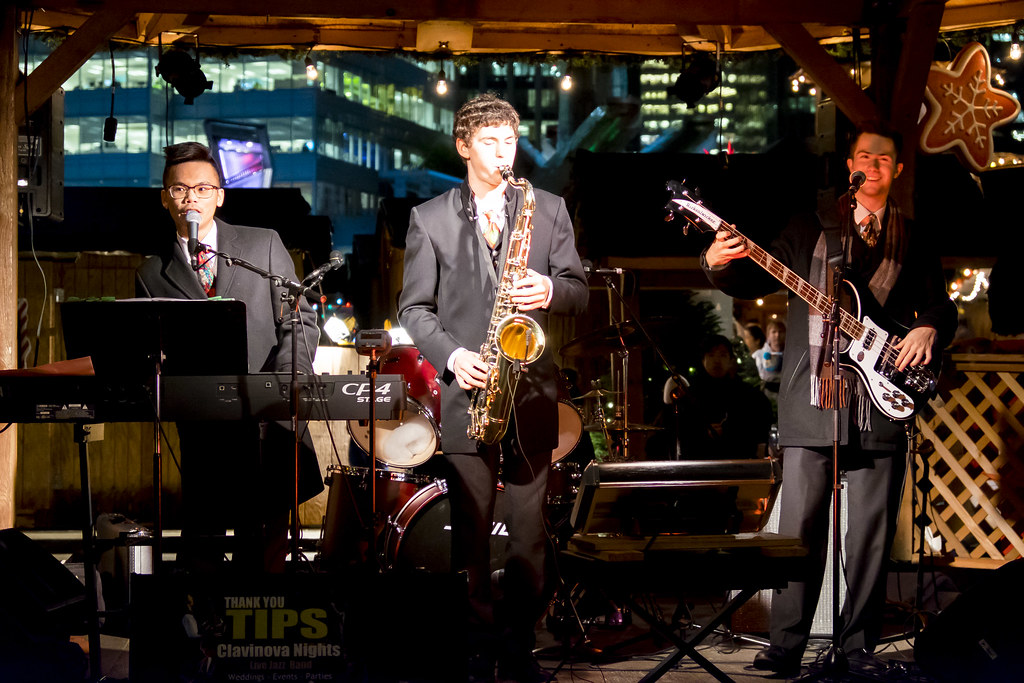 Another thing is the increase in price at some of these vendors and I’m guessing it’s because the new venue costs more and takes up more space. Last year’s jagerschnitzel ($14.50) is now $16, and the 2015 Pork Hock ($15) now comes with sauerkraut but also costs $19.50. 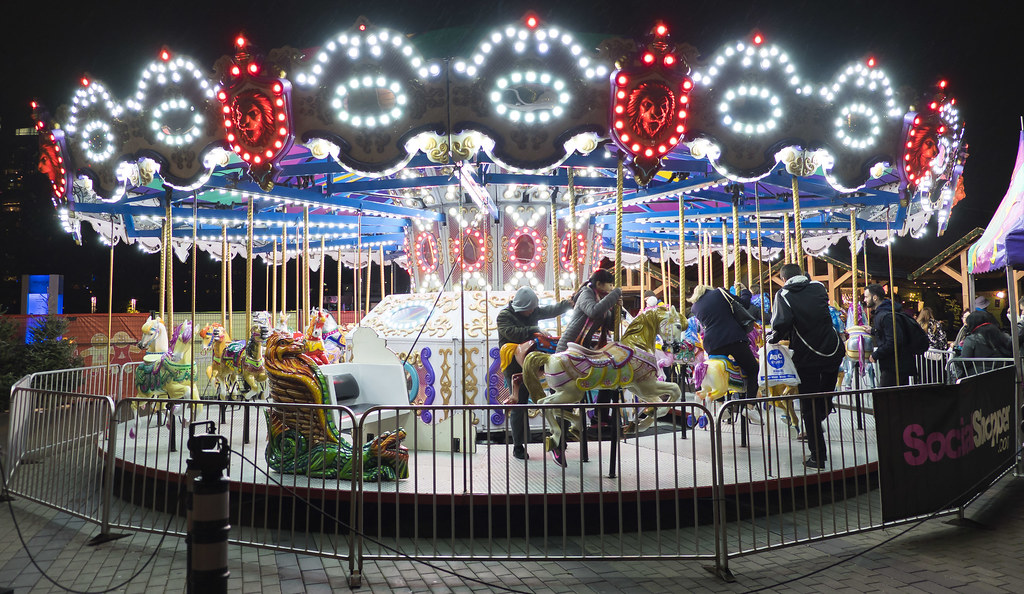 One-liner: Tons of German Christmas fun for a date night or an intimate gathering consumed in about 90 minutes
Highlight: Jagerschnitzel
Estimated price per person: $30-$35 including ticket and excluding retail goods
Would I go back? Yes.

Now that we're into Vancouver's December, this much is clear: Christmas is in the air and tons of businesses…

Disclosure: This was a complimentary sampling provided in exchange for an honest review and no monetary compensation. Where does…