Disclosure: This event was absolutely free to the public. I received a media invitation to sit with regular ticket holders. All opinions are my own. 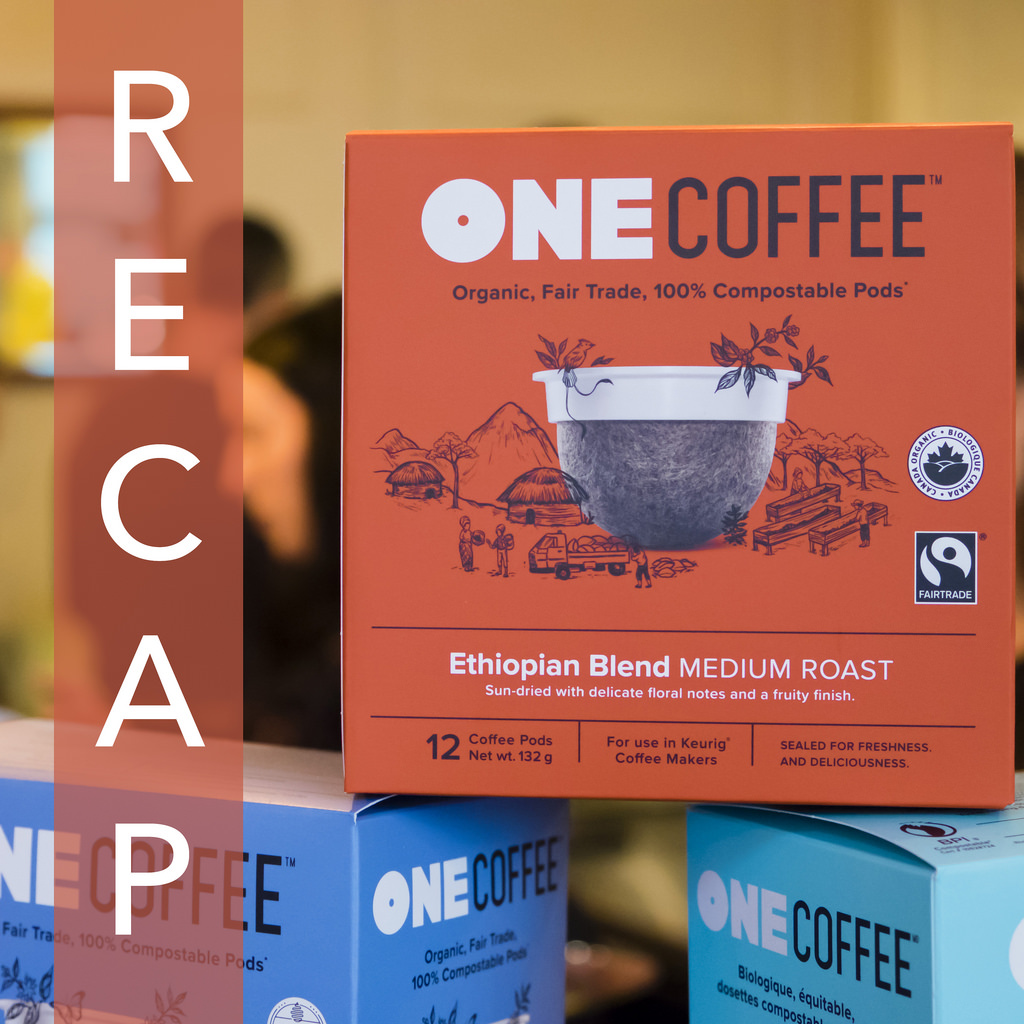 Team Do came here for a 9:30am brunch session and I had a great taste of the following:

I could share 3 photos of the coffees, but they all looked the same, so here's just the one Columbian Blend. This had a mild flavour with notes of citrus and herbs. This was all carefully explained to me by a trainer who was the coffee version of a sommelier. 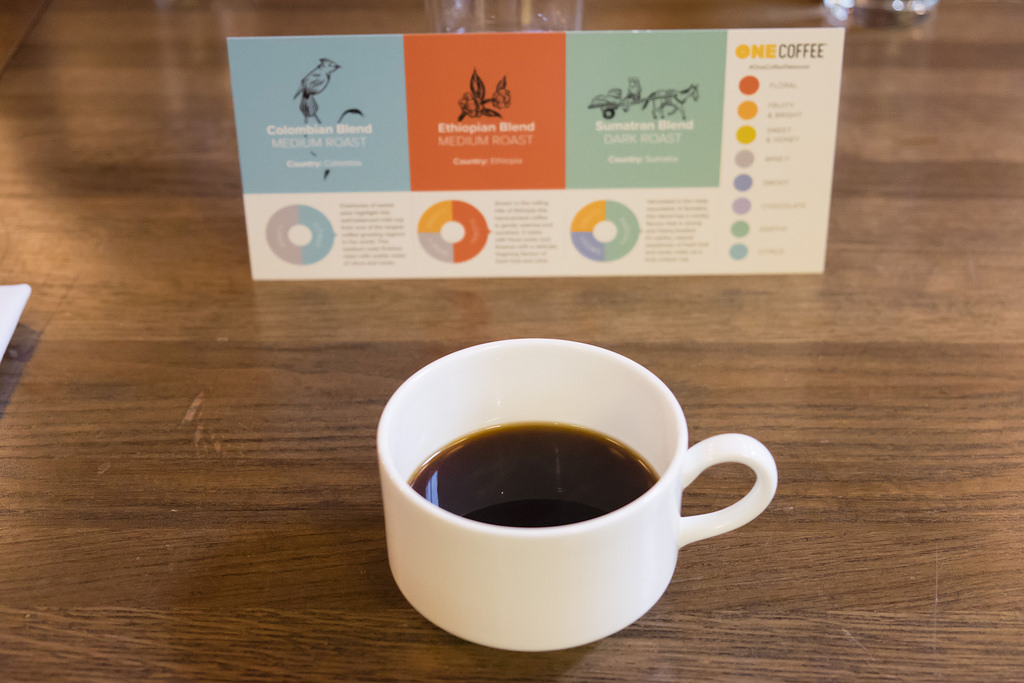 My favourite coffee was the Ethiopian Blend with its floral fruitiness flavours. This was a great match with the saumon fumée I ordered because of a great match between the medium-body flavour and the smoked salmon's saltiness. 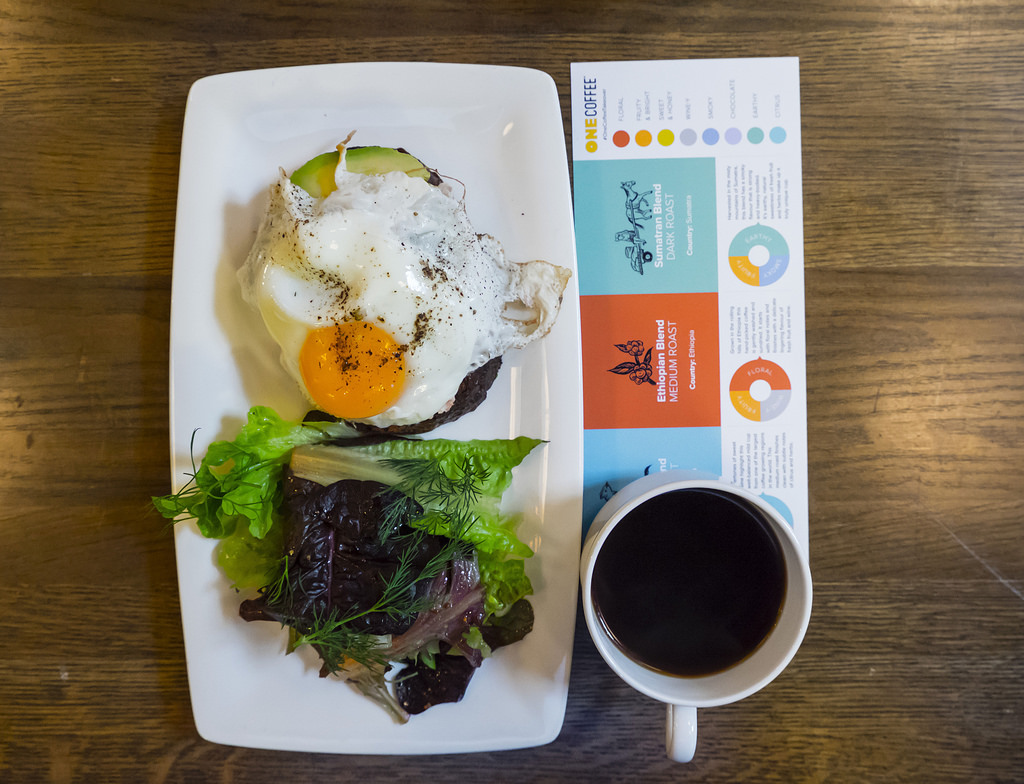 One other pairing we enjoyed was the Sumatran Blend with the fricasée. Much like wine, this bolder coffee flavour paired well with a bolder profile of the savoury braised short rib in the fricasée. Earthiness in the coffee really did feel like it boosted the flavour of the fricasée. It's crazy how right these coffee trainers were or maybe it was easy to buy into the coffee pairing philosophy they were sharing.

And yes, these were all solid coffee roasts. While not as fresh as visiting a roaster on the day after roasting, these had a satisfying aroma and taste as good as any cafe. I think that qualifies at least par as far as coffee pods go. 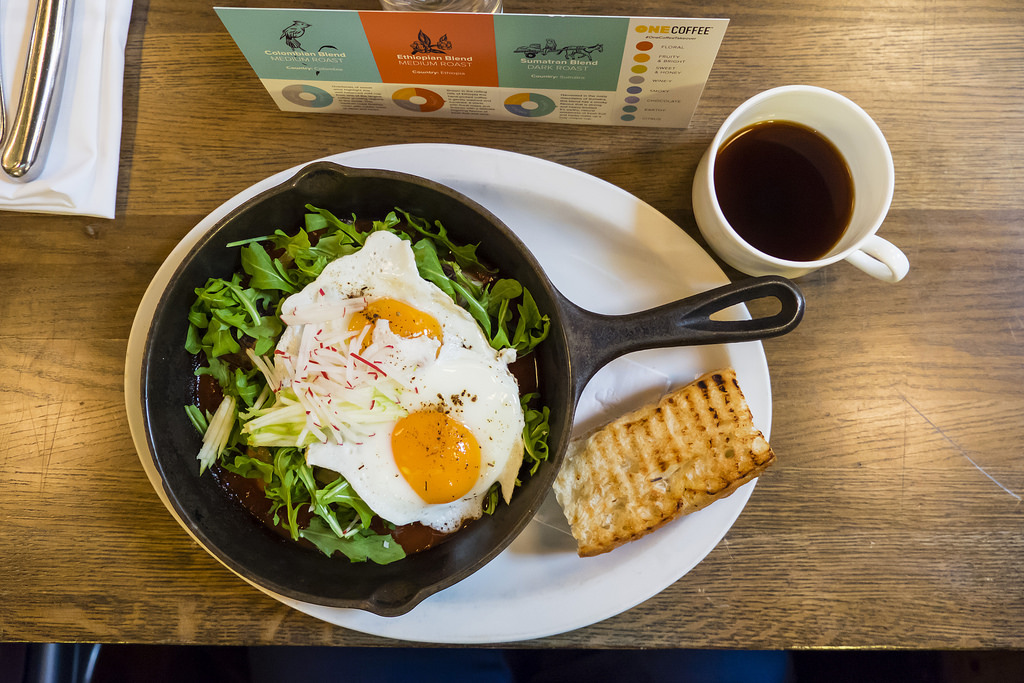 We finished with a classic Belgian waffle served with a milk chocolate lavender mocha sauce that was blended with OneCoffee coffee. Fluffy, Belgian-shaped waffles are always a welcome finisher in my book. 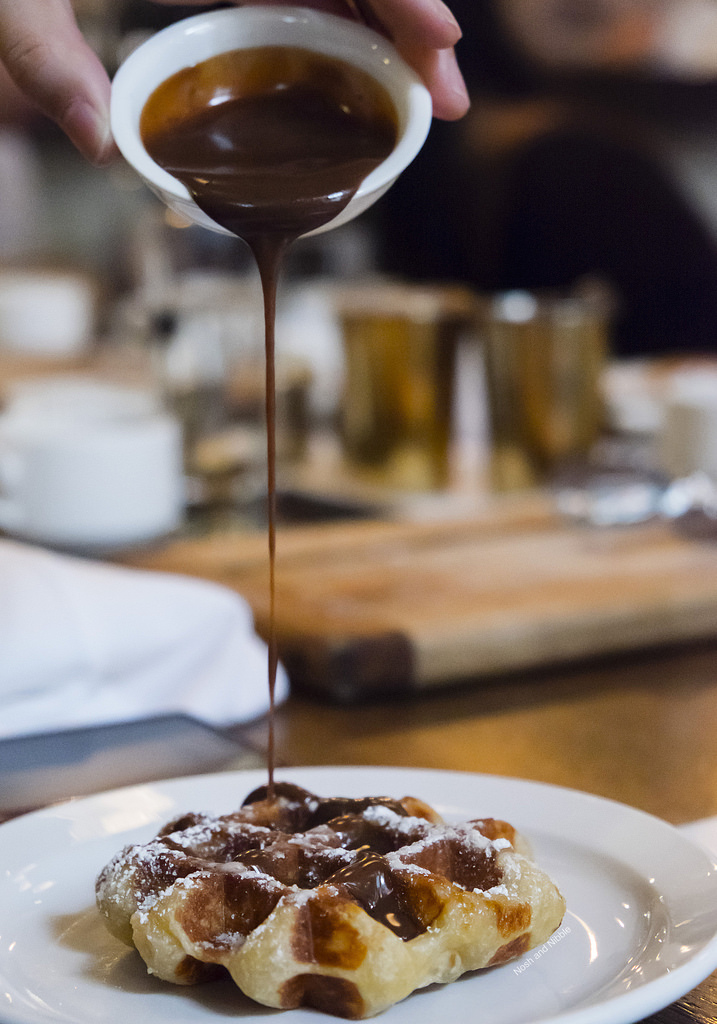 OneCoffee and Medina Cafe partnered up to host a free (I repeat, FREE) brunch for anyone who signed up fast enough. You may recall me talking up OneCoffee earlier on the blog because I believe news on free brunch is always worth sharing. It was an astounding experience considering Medina Cafe generally operates on a first-come-first-serve basis and the food was just as good as a regular Medina brunch (or Chambar, their sister eatery). I'm pretty sure everyone left feeling way fuller compared to the average Dine Out Vancouver meal. 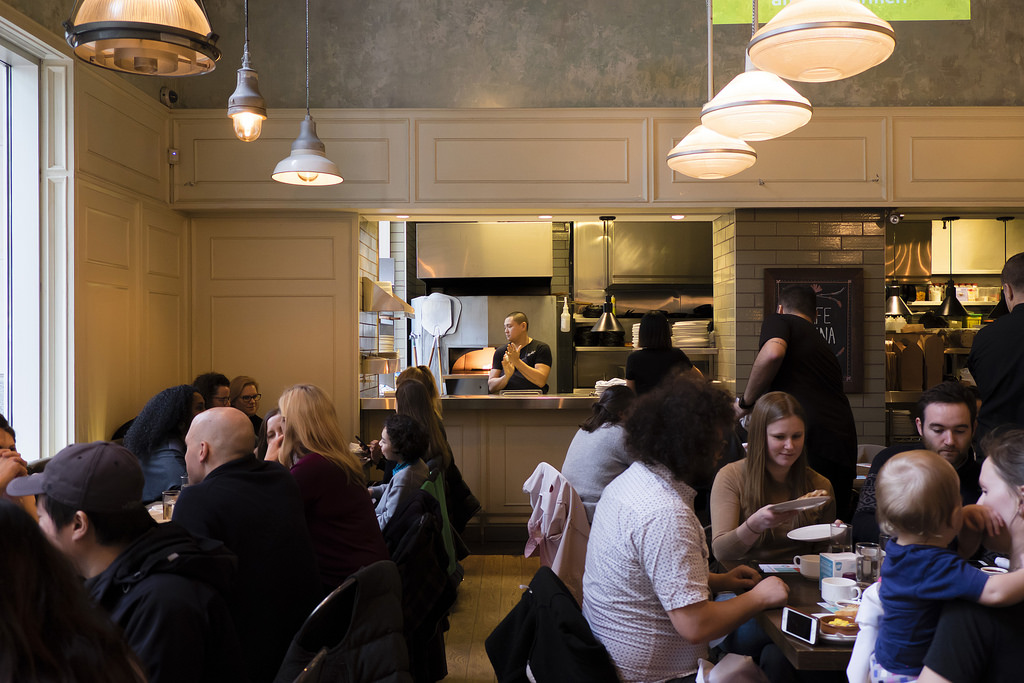 Some other interesting tidbits about OneCoffee's compostable coffee pods:

And unrelated, but the guy who invented Keurig's original K-cups sometimes regrets inventing them due to the amount of waste the cups have created. 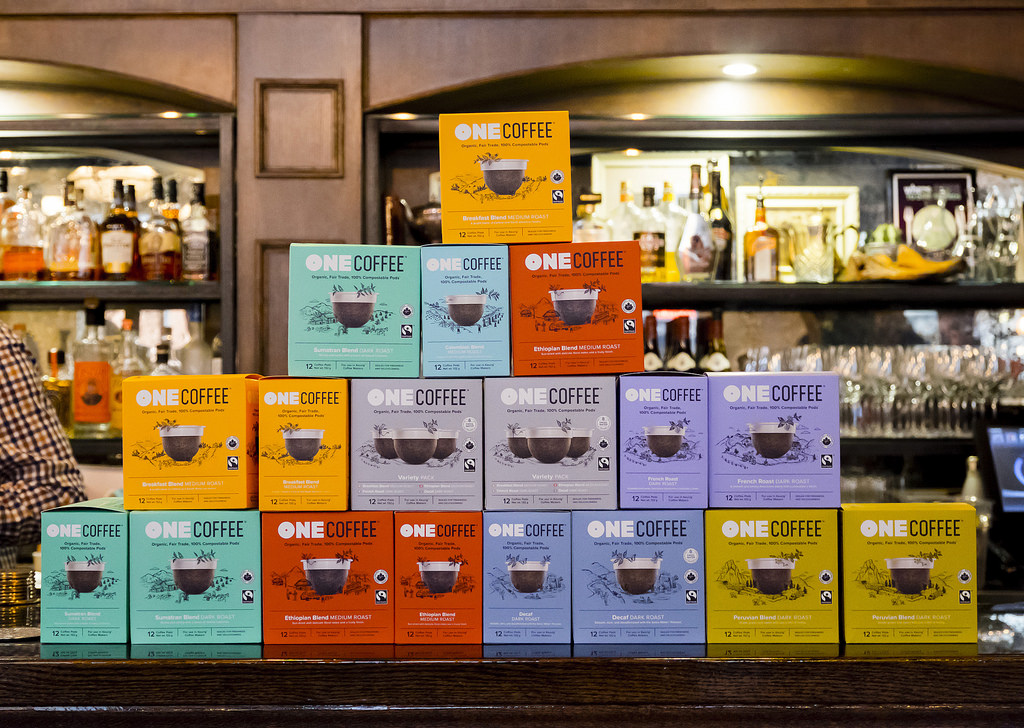 For me, I don't drink a lot of coffee at home, but I do hear a lot about landfills filling up faster year-over-year. Coffee addiction is a real thing so I think anything consumers can do with using and accepting compostable coffee pods is a great step to reducing what we put in landfills. We should also consider taking reusable coffee cups when we do takeout from coffee shops to reduce the use of paper cups. This is especially true at places like Starbucks and McDonald's who exclusively use paper cups for their coffee drinks.

For more information on OneCoffee, visit their website at http://onecoffee.com/.

Chocolate is forever in demand. To exemplify this love of chocolate, the end of 2017 saw Lindt open a…

Di Beppe is a 2-part eatery in Vancouver's Gastown neighbourhood. As some of you may have read in yesterday's…